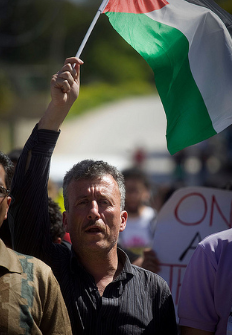 After nearly a year in Israeli jail, standing trial for charges pertaining to protest organizing in his west bank village of Nabi Saleh, Bassem Tamimi was named prisoner of conscience by Amnesty International. In its statement the organization called for Tamimi’s immediate and unconditional release. Tamimi’s next court hearing will take place this Sunday, March 5th, 10:30 AM at the Ofer Military Court.

“Palestinian human rights defender Bassem Tamimi is a prisoner of conscience, detained solely for his role in organizing peaceful protests against the encroachment onto Palestinian lands by Israeli settlers, and should be released immediately and unconditionally”, Amnesty International said today. 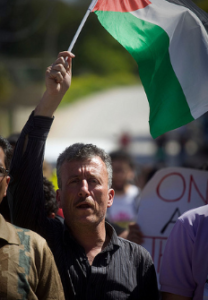 “The Israeli army has repeatedly used excessive force in countering these demonstrations, as a result of which the organizers reiterate instructions for Palestinian demonstrators to adhere to non-violent methods. Occasionally, individual protestors have engaged in throwing stones at soldiers. One such protestor, Mustafa Tamimi, was shot in al-Nabi Saleh on 10 December 2011 by a high-velocity tear gas projectile fired at his head at close range from an Israeli military jeep. He died the next day in hospital”, the organization’s press release added.

Legal background
On March 24th, 2011, a massive contingent of Israeli Soldiers raided the Tamimi home at around noon, only minutes after he entered the house to prepare for a meeting with a European diplomat. He was arrested and subsequently charged.

The main evidence in Tamimi’s case is the testimony of 14 year-old Islam Dar Ayyoub, also from Nabi Saleh, who was taken from his bed at gunpoint on the night of January 23rd. In his interrogation the morning after his arrest, Islam alleged that Bassem and Naji Tamimi organized groups of youth into “brigades”, charged with different responsibilities during the demonstrations: some were allegedly in charge of stone-throwing, others of blocking roads, etc.

During a trial-within-a-trial procedure in Islam’s trial, motioning for his testimony to be ruled inadmissible, it was proven that his interrogation was fundamentally flawed and violated the rights set forth in the Israeli Youth Law in the following ways:

The audio-visual recording of another central witness against Tamimi, 15 year-old Mo’atasem Tamimi, proves that he too was questioned in a similarly unlawful manner and was led to believe that implicating others, may earn him a more lenient treatment. The boy was told, numerous times, “Tell us what happened […] and who in the village incited you to throw stones. […] (shouting) you were incited! You…. you are a young boy, Incited by people. Grownups, we know. It’s the grownups who incite you, right?”

Since the beginning of the village’s struggle against settler takeover of their lands in December of 2009, the army has conducted more than 80 protest related arrests. As the entire village numbers just over 500 residents, the number constitutes approximately 10% of its population.

Tamimi’s arrest corresponds to the systematic arrest of civil protest leaders all around the West Bank, as in the case of the villages Bil’in and Ni’ilin.

In a recent, nearly identical case, the Military Court of Appeals has aggravated the sentence of Abdallah Abu Rahmah from the village of Bilin, sending him to 16 months imprisonment on charges of incitement and organizing illegal demonstrations. Abu Rahmah was released on March 2011. 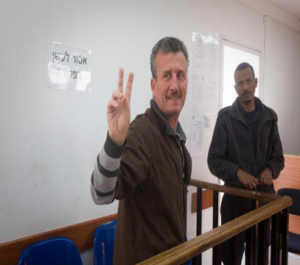 The arrest and trial of Abu Rahmah has been widely condemned by the international community, most notably by Britain and EU foreign minister, Catherin Ashton. Harsh criticism of the arrest has also been offered by leading human rights organizations in Israel and around the world, among them B’tselem, ACRI, as well as Human Rights Watch, which declared Abu Rahmah’s trial unfair, and Amnesty International, which declared Abu Rahmah a prisoner of conscience.

Personal Background
Bassem Tamimi is a veteran Palestinian grassroots activist from the West Bank village of Nabi Saleh, north of Ramallah. He is married to Nariman Tamimi, with whom he fathers four children – Wa’ed (14), Ahed (10), Mohammed (8) and Salam (5).

As a veteran activist, Tamimi has been arrested by the Israeli army 11 times to date, though he was never convicted of any offense. Tamimi spent roughly three years in administrative detention, with no charges brought against him. Furthermore, his attorney and he were denied access to “secret evidence” brought against him.

In 1993, Tamimi was falsely arrested on suspicion of having murdered an Israeli settler in Beit El – an allegation of which he was cleared of entirely. During his weeks-long interrogation, he was severely tortured by the Israeli Shin Bet in order to draw a coerced confession from him. During his interrogation, and as a result of the torture he underwent, Tamimi collapsed and had to be evacuated to a hospital, where he laid unconscious for seven days. As a result of the wounds caused by torture, Tamimi was partially paralyzed for several months after his release from the hospital.

At the opening of his trial on June 5th, Tamimi pleaded “not guilty” to all charges against him, but proudly owned up to organizing protest in the village. In a defiant speech before the court he said, “I organized these peaceful demonstrations to defend our land and our people.” Tamimi also challenged the legitimacy of the very system which trys him, saying that “Despite claiming to be the only democracy in the Middle East you are trying me under military laws […] that are enacted by authorities which I haven’t elected and do not represent me.” (See here for Tamimi’s full statement).

The indictment against Tamimi is based on questionable and coerced confessions of youth from the village. He is charged with’ incitement’, ‘organizing and participating in unauthorized processions’,’ solicitation to stone-throwing’, ‘failure to attend legal summons’, and a scandalous charge of ‘disruption of legal proceedings’, for allegedly giving youth advice on how to act during police interrogation in the event that they are arrested.

The transcript of Tamimi’s police interrogation further demonstrates the police and Military Prosecution’s political motivation and disregard for suspects’ rights. During his questioning, Tamimi was accused by his interrogator of “consulting lawyers and foreigners to prepare for his interrogation”, an act that is clearly protected under the right to seek legal counsel.

As one of the organizers of the Nabi Saleh protests and coordinator of the village’s popular committee, Tamimi has been the target of harsh treatment by the Israeli army. Since demonstrations began in the village, his house has been raided and ransacked numerous times, his wife was twice arrested and two of his sons were injured; Wa’ed, 14, was hospitalized for five days when a rubber-coated bullet penetrated his leg and Mohammed, 8, was injured by a tear-gas projectile that was shot directly at him and hit him in the shoulder. Shortly after demonstrations in the village began, the Israeli Civil Administration served ten demolition orders to structures located in Area C, Tamimi’s house was one of them, despite the fact that part of the house was built in 1965 and the rest in 2005.